You are here: Home1 / Interpreting 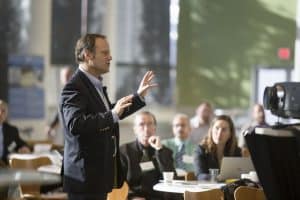 Interpreting is conveying a message orally from one language into another with the aid of an interpreter. There are various styles of interpreting, but they are all grouped into two major techniques:

The interpreter speaks only a few words behind the speaker. There is no time for taking notes; this is a very fast-paced scenario. In general, this type of interpreting requires equipment – either a booth or a portable kit – and the interpreter tends to be positioned away from the speaker.

Simultaneous interpreting is mostly used in larger conferences and meetings, or in situations where it is preferable to avoid interruption to the speaker (aside from a possible Q&A session).

Because it is a very demanding job, interpreters tend to work in pairs (or groups of three for some language combinations) and swap every few minutes.

Whispering (also called chuchotage) is a style of simultaneous interpreting. This is used when, for example, a participant in a meeting needs an interpreter near them, interpreting the message from the speakers very closely (hence the term whispering).

It is important to note that simultaneous interpreting is carried out from one source language into a target language, for example, a Japanese scientist speaks in Japanese and the message is conveyed orally to the English-speaking audience.

This type of interpreting can be used in a wide variety of scenarios such as smaller business meetings, tours, medical visits and so on.

In consecutive interpreting, particularly in a style called liaison, the interpreting is done bilingually – that is, from source to target and vice-versa. For example, the president of a foreign company visiting a British CEO might bring a liaison interpreter to convey the message both from and into English.

Do you need interpreting equipment?

It is vital to establish in advance which type of interpreting you require, since equipment may be needed. Most interpreters are specifically trained to work in either simultaneous or consecutive mode, but not both – so for the best result it’s important to pick the right type of professional for the job.

To find out more about interpreting or discuss your requirements, please do not hesitate to contact us.

Let Mundus Verborum interpret your words to the world.